Homeopathy on the NHS: at death's door

Homeopathy on the NHS falls for the eighteenth consecutive year

New figures released today show that homeopathy on the English NHS has fallen to a new low. The number of NHS prescriptions for homeopathy in England, fulfilled in community pharmacies, dropped by a further 13% in 2015 from the previous year and is 95% down from its peak nearly 20 years ago.

The data are compiled by the Health and Social Care Information Centre (HSCIC) — the official source of data for the NHS — and published as their Prescription Cost Analysis (PCA) data set.* 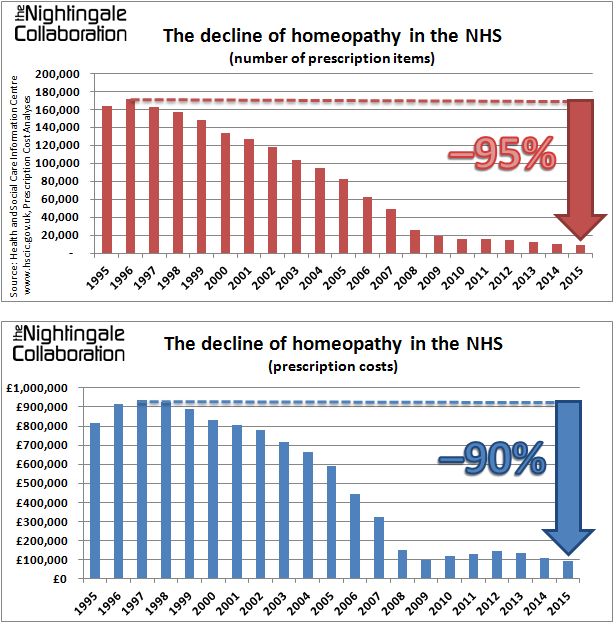 The complete data for these charts are (all these figures can be verified from the original HSCIC data):

This follows on from other recent blows to NHS homeopathy: the closure of the homeopathy clinic at the South Bristol Community Hospital in Bristol, the reviews by both Liverpool CCG and Wirral CCG on ending the funding of homeopathy via the Liverpool Medical Homeopathy Service and other successfully completed reviews.

And the forthcoming Department of Health review of the blacklisting of homeopathy could mean CCGs are no longer able to prescribe it — not that many do now anyway.

Dilution by dilution, succussion by succussion, sugar pill by sugar pill, homeopathy is slowly but surely being removed from the NHS.

This will not be welcomed by homeopaths who businesses rely on the (undeserved and unearned) legitimacy that being provided on the NHS lends to homeopathy, but it's the inevitable result of the their own failure to provide robust evidence of its efficacy.

In other news, however, it was announced by the international service of the Swiss Broadcasting Corporation, SwissInfo.ch, as:

…but it would have been more accurate to say:

Swiss to recognise homeopathy as if it were legitimate medicine

…the interior ministry said it had come to the conclusion that it was “impossible to provide such proof for these disciplines in their entirety”.

So, it's not that the Swiss authorities had come across good evidence that homeopathy (and the other treatments covered) were, indeed, effective; more that they gave in and decided to reimburse them anyway, despite the lack of evidence.

The saga of homeopathy in Switzerland goes back many years (see That ‘neutral’ Swiss homeopathy report). Full and permanent inclusion in the Swiss state health reimbursement scheme from 2017 onwards was supposed to be contingent on being provided with evidence of "efficacy, cost-effectiveness and suitability" by 2015. Not surprisingly, homeopaths seem to have failed at that and the Swiss Government have completely ignored the findings of the comprehensive report by the Australian National Health and Medical Research Council that concluded:

It is therefore perverse that the Swiss Government should appear to bend over backwards to ignore the evidence and agree to pay homeopaths for dispensing their magic sugar pellets.

But it may not be as smooth a ride as the homeopaths might like. Reimbursement will only take place for treatments administered by certified medical doctors. Additionally, according to the official announcement in Komplementärmedizin soll anderen Fachrichtungen gleichgestellt werden, some criteria apply concerning tradition of usage and research, scientific evidence and medical experience and further education. Also, some treatments that are seen as critical are to be examined and potentially excluded from the reimbursement. It's not at all clear exactly what this will mean for the homeopaths, but this may not be the full endorsement from the Swiss Government they would like to believe.

This Sunday is the anniversary of the birth of the inventor of homeopathy, Samuel Hahnemann, heralding the start of World Homeopathy Awareness Week.

So as homeopathy on the NHS is in what must surely be its death throes, what better time to help others be aware of homeopathy?

Help spread the good news about homeopathy by sharing this newsletter and the following resources and further reading:

How does homeopathy work?

Should Homeopathic Remedies Be Blacklisted On The NHS?&nbspby the Good Thinking Society

* For details of how to extract the data on homeopathy from the (very large) HSCIC data set, see:  An idiot’s guide to understanding NHS homeopathy prescription data