It's been over two-and-a-half years since Nelsons Homeopathic Pharmacy last featured here. The saga continues…

The last time we looked at Nelsons, we told you of our complaint against them that the medicines regulator, the MHRA, upheld. This concerned their advertising on their websites of homeopathy products that were not within the terms of their registrations.

We briefly mentioned that this was part of a larger complaint: our MHRA complaint ran in parallel with another complaint we had submitted to the General Pharmaceutical Council (GPhC), the regulator for pharmacists and pharmacies. That was completed some months ago but we were waiting for the MHRA to announce their decision on their part of that complaint.

Yesterday the publication by the MHRA of their decision on that complaint so we can now reveal that and regale you with the catalogue of errors and mishandling by the GPhC now everything has been properly — and finally — resolved.

We submitted our original complaint on 28 May 2015 — nearly three years ago. It's just as well we are determined and patient!

Although the two stories are closely intertwined, for simplicity, we will detail the MHRA parts of the complaints here and will address the GPhC complaints in a subsequent newsletter. As you will appreciate, this is a long and involved story, but we feel it's necessary to put much of it into the public domain.

Our complaints arose from a visit we paid to Nelsons Homeopathic Pharmacy in Mayfair, London on 12 May 2015. We were appalled by what we saw there and, in summary, we submitted the following complaints about the pharmacy, their pharmacy website and their Nelsons Natural World website, each complaint following the previous because we felt they were not dealt with properly:

Complaint 1: 28 May 2015 Joint complaint to the MHRA and GPhC about Nelsons' pharmacy and website.

Complaint 2: 20 July 2016 Second joint complaint to the MHRA and GPhC about Nelsons' pharmacy.

Complaint 3: 28 November 2016 Third joint complaint to the MHRA and GPhC about Nelsons' pharmacy.

The MHRA and GPhC took some nine months just to sort out among themselves what parts of the complaint came under their respective remits: it wasn't until January 2016 that the GPhC contacted us to progress the complaint.

However, the website parts of the complaint are the responsibility of the MHRA. They dealt with this and this was what we wrote about in our earlier newsletter: Nelsons Homeopathic Pharmacy #1 in August 2015. Another part of that complaint was about Schuessler Tissue/Cell Salts products that were on sale in the pharmacy. This was also dealt with separately by the MHRA as it raised different issues. For further details, see: Rubbing salts into the wounds of homeopathy and see below.

Although the MHRA upheld these parts of the complaint, they failed to mention what we believed to be issues concerning the pharmacy premises that we understood fell within their remit. We therefore submitted a second complaint.

The GPhC were still dealing with our first complaint but this is an extract from our second joint complaint, submitted after a second visit to Nelsons. We kept it as a joint MHRA/GPhC complaint because we didn't want anything to fall through the cracks.

We're sure you will be as concerned and as disappointed as we are that despite previous rulings that the POS [Point of Sale] material was not permitted and despite your previous action, this and other materials are still being used and that unauthorised medicines are being displayed and sold. It is difficult to understand why these obvious breaches have not been properly addressed by all concerned long before now and that we have had to submit a further complaint.

In summary, our concerns are that Nelsons are still:

We sincerely hope that our complaints will now be fully and thoroughly investigated and that any breaches of the regulations are finally dealt with.

Some of these points relate to the complaint to the GPhC so read the next newsletter to find out what they are all about.

The MHRA duly dealt with this and told us:

We have received confirmation from Nelsons that they have taken action to address points 1-5 & 7 above.

Great. All sorted then…

However, we paid their premises a third visit and found the 'Which remedy do I need?' wire-bound point of sale promotional material for their registered and authorised homeopathic products was still attached to the rack of products. We also found Schuessler Tissue/Cell Salts products on the shelves that gave the potency as a numeric value such as 6X on the front of the label. These were clearly against what the MHRA had ruled for these products, had told Nelsons and what Nelsons had supposedly addressed, so we had to submit a third complaint.

The MHRA published their decision on that complaint yesterday.

As we've mentioned before, what the MHRA publishes on their website about the outcome of complaints can, at best, be described as sketchy. We did mention this to the MHRA and we're pleased to see this latest report has significantly more detail: 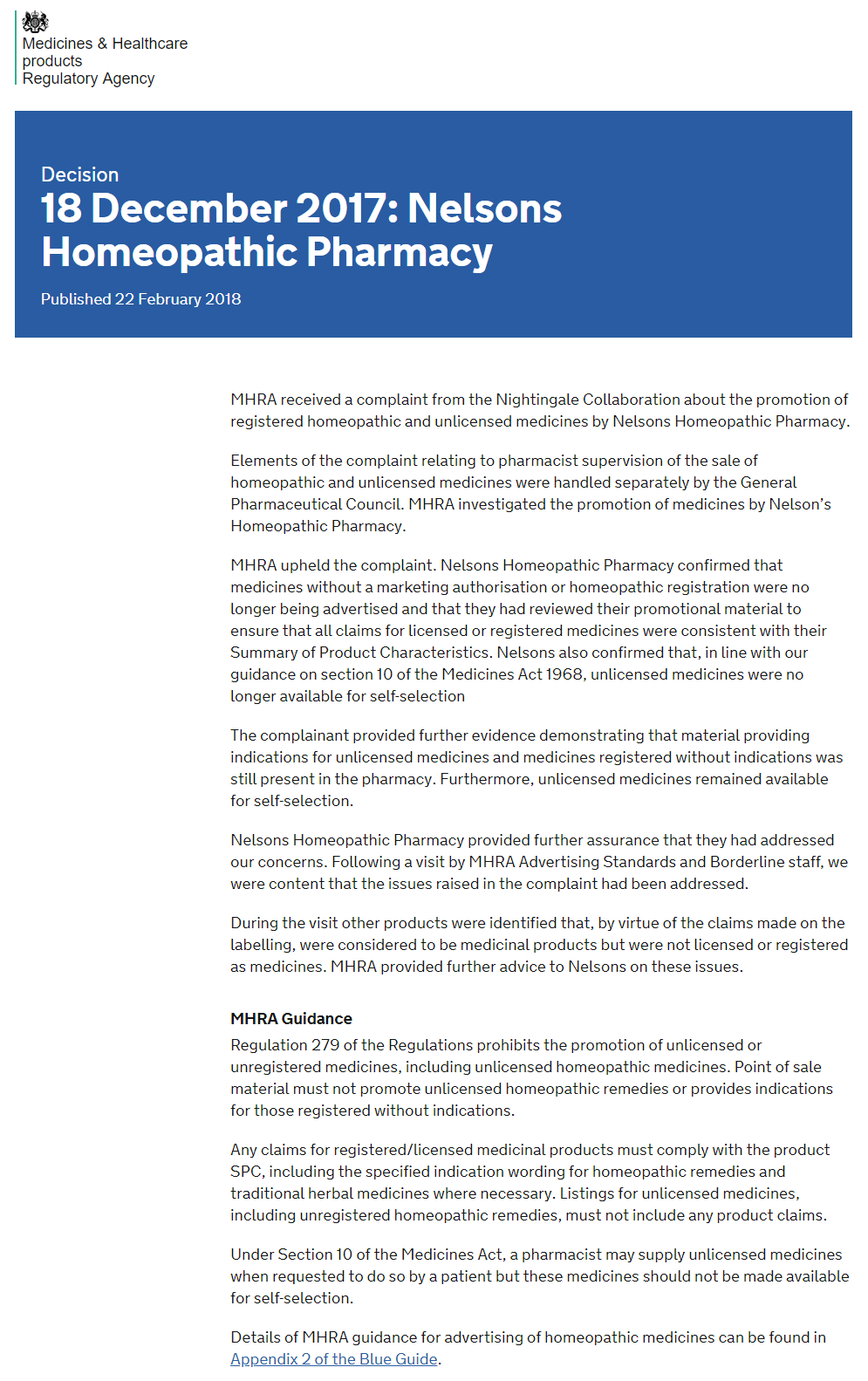 It has taken them over two months just to publish this,

In their 'final' letter to us for this complaint they gave more details on each of the points we identified above:

Thank you for your email of 28 July 2016 concerning the promotion of homeopathic medicines by Nelsons Pharmacy.

We have been in correspondence with Nelsons and have completed our investigations. We provided the following guidance on our interpretation of the law, numbered as per your original complaint, and requested confirmation that the necessary action has been completed:

3 Point of sale material should not promote unlicensed homeopathic remedies or provide indications for those registered without indications.

4&5 Tissue Salts/Schuessler Salts are generally considered to be medicinal products if any of the following appear in promotional material or product labelling:

b. a numerical value for the potency e.g. 6X and/or the word ‘potency’ itself

c. indications for use in a medical condition

If they are not licensed or registered and any of the above appear then such products would be likely to be considered unlicensed medicines and should therefore not be advertised. Our advice above would also apply.

7 Our advice above will also apply to these products.We have received confirmation from Nelsons that they have taken action to address points 1-5 & 7 above. They have also confirmed that, in line with point 6, all material will be further reviewed and amended as necessary to ensure that all promotional material is compliant with the SPC for licensed/registered medicines by the end of 2016.

Essentially, it took three complaints and several years to get this sorted. Nelsons should now be in no doubt of their responsibilities under the Human Medicines Regulations 2012 (HMR) and the Medicines Act 1968 as they relate to the following distinct areas:

A. The supply, sale and advertising of unauthorised homeopathic medicinal products (as the HMR calls them), ie those homeopathic products that are not authorised under the National Rules (NR) Scheme or not registered under the Homeopathic (Simplified) Rules (HR) Scheme — we can ignore any Product Licences of Right as they effectively no longer exist.

B. The supply, sale and advertising of Schuessler Tissue/Cell Salts.

C. The terms of the authorisation or registration of NR and HR scheme products.

There is more to be said about these, particularly the first one, but we first need to look at our complaints to the GPhC, how they dealt with them and what the outcomes were. We hope to publish that comedy of errors in the few days.