Yet another bad year for homeopathy

Continuing its decline, the number of prescriptions for homeopathy products dispensed in community pharmacies in England plummeted 25% in 2017 to just 5,105. The cost to the NHS of these prescriptions dropped 32% from £92,412 to £62,124, according to data published two weeks ago by NHS Digital, further cutting the income and profit of manufacturers.

The number of prescriptions is now just 3% of what it was at the height of its popularity in the mid-1990s. 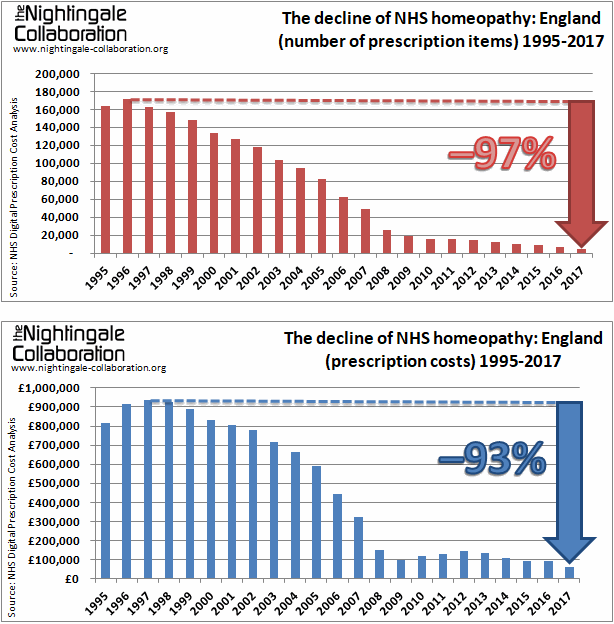 The decline is to be expected given the ending of funding by CCGs in Liverpool, the Wirral, Enfield and elsewhere.

The admission a few weeks ago by the Royal London Hospital for Integrated Medicine that they would no longer be providing homeopathy consultations or dispensing NHS homeopathy prescriptions can only be a further source of acute embarrassment to what used to be homeopathy's NHS flagship.

The NHS in Scotland collects their data on a different timescale, publishing data for the previous financial year rather than the calendar year of the NHS in England. The latest data for Scotland was published last September, covering the year to April 2017 (in the chart, the data are assigned to the year of the start of the period). 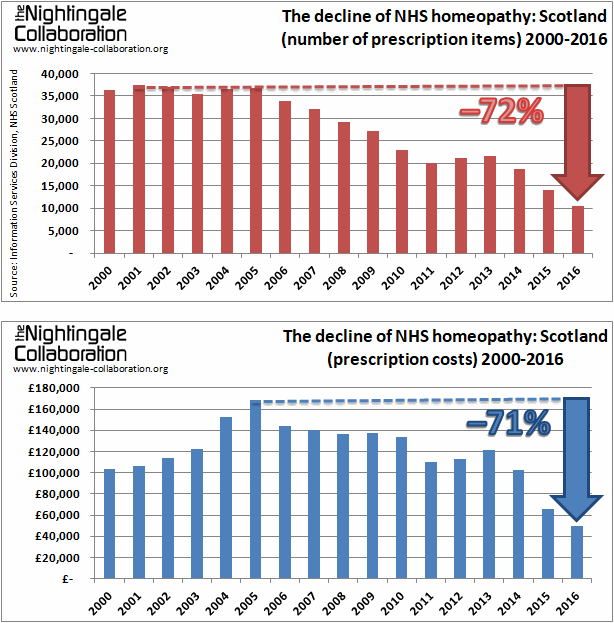 Curiously, in 2017, the only item categorised as homeopathic is called Zota Swedish Bitters. This appears to be a herbal product, not homeopathic, but it is the only item listed last year (and the few other months' data going back to 2015 we checked) under the BNF section for homeopathy products. This appears to be an error by the NHS in Wales: either this herbal product has been wrongly categorised as homeopathic or they have simply used Zota Swedish Bitters as some kind of a default text for this field in their database. It could be that they have no homeopathic products at all, but we will assume these are homeopathic — because of the relatively low numbers compared to England and Scotland, they won't make much difference to the overall totals below.

The Business Services Organisation of the Department of Health in Northern Ireland publish their own similar data on prescriptions. There was a massive increase in the number of homeopathic prescription items in 2016 compared to previous years: from 2000 to 2015 there had been precisely zero items but this jumped up to two in 2016! These were packets of 'Teetha Homeopathic Granules 7G Sachets Sugar Free Homeopathic Granules 6c'. This is a product manufactured by Nelsons that used to have a Product Licence of Right, but that has now been cancelled by the MHRA. At least this product only contained Chamomile (in a declared dilution of one part in 1,000,000,000,000) and not the Belladonna found in some US products. (A future newsletter will cover suspected adverse events in the UK from homeopathic teething products.)

Now we have the data from all the constituent parts of the UK, what does the overall picture look like?

Ignoring the slightly different annual periods, the number of prescription items for the whole of the UK is: 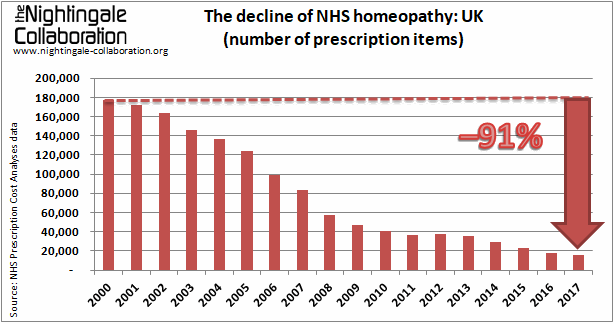 The total cost of these prescriptions amounts to £113,729 in 2017. That is just the cost of the prescriptions themselves and does not include any other costs such as salaries and fixed and variable overheads that the NHS has to bear just to provide these products.

Homeopathy, and the legitimacy given to it by its provision on the NHS, has been diluted and diluted over the years. It's difficult to see how it can ever recover from this decline.

If you are interested in many of the regulatory aspects of homeopathy in the UK as well as in Ireland, the US and India, the blog UK Homeopathy Regulation is an excellent resource and fount of detailed information.