Thirty-one different health professions consisting of over 1.4 million professionals (from medical doctors and nurses to osteopaths and chiropractors) are currently statutorily regulated and overseen by ten regulatory bodies: 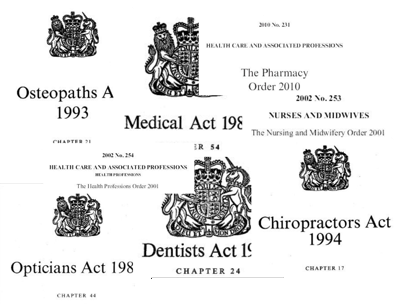 …the regulators operate within a wide variety of legal frameworks which have been agreed and amended by Parliament in different ways and at different times over the past 150 years. A complex legislative landscape has evolved on a piecemeal basis resulting in a wide range of idiosyncrasies and inconsistency in the powers, duties and responsibilities of each of the regulators. There are currently seven separate Acts of Parliament and three Orders made under section 60 of the Health Act 1999 which govern 10 regulatory bodies. These have all been amended extensively by 16 Orders made under the Health Act 1999 and a range of Acts of Parliament over the last 10 years.

In essence, it's a nightmare to administer, confusing to the public and the Department of Health wants to simplify this tangled mess.

So, the Law Commission, the Scottish Law Commission and the Northern Ireland Law Commission published a joint consultation setting out their proposals to consolidate the various Acts and Orders into one, with variations for different regulators only where necessary.

But note that this is simply consolidating the regulations, not the regulators themselves so there was no direct proposal to merge or abandon any of the regulators. However, having regulators all set up under the one common Act may well make merging some of them easier in the future.

The lengthy consultation document covered numerous aspects of the current regulations and how the Law Commissioners proposed to tackle them. It also asked for views on several key questions.

There are many differences between the regulators in what their duties are, the way they are constituted, the requirements they place on their registrants and the way they run complaints and fitness to practice panels.

We took the opportunity to make recommendations on some aspects as they applied to chiropractors and osteopaths.

The consultation ended last Thursday and the Council for Healthcare Regulatory Excellence has published their response. You can read our response here.

There's another consultation currently in progress that interests us.

The Council for Healthcare Regulatory Excellence (CHRE) — to be renamed the Professional Standards Authority for Health and Social Care in November — is setting up a register of registers.

The CHRE's new duty to set up this register was part of the Health and Social Care Act 2012 and it will:

…set standards for organisations that hold voluntary registers for people working in health and social care occupations and we will accredit the register if they meet those standards. It will then be known as an 'Accredited Register'.

The CHRE is the 'regulator of regulators' who:

…scrutinise and oversee the work of the nine regulatory bodies that set standards for training and conduct of health professionals.

The nine regulators are the ones the Law Commissioners are wanting to bring together under one Act.

Sixty-six organisations and trade bodies that have a register of health professionals have already expressed an interest in this accreditation scheme but this includes homeopaths, crystal healers, reiki practitioners, acupuncturists, anthroposophists and various organisations that cover a variety of alternative therapies.

Even the Complementary and Natural Healthcare Council are interested in the scheme.

There are standards that will have to be met, but it is not clear that these standards and the eligibility requirements are rigorous enough to prevent it being taken advantage of by practitioners of therapies for which there is not a jot of evidence.

We believe that being a CHRE Accredited Register will lend unearned and undeserved legitimacy to many alternative therapies — this can only mislead the public.

Further details of the consultation can be found on the CHRE's website.

We will be submitting our own response but we encourage our supporters to let the CHRE know their own views.

The CHRE have made this easy by providing a short online survey of the eight questions the consultation is seeking responses on and we strongly encourage our supporters to complete this or submit the questionnaire included in the consultation document and send it to them by email or post.

The closing date for your response is 10 July 2012 and we'll publish our response once we've submitted it.