Is the Complementary and Natural Healthcare Council fit for purpose?

That depends what you think their purpose is…

Our supporters (and others) will remember our long-running campaign to test the resolve of the Complementary and Natural Healthcare Council to protect the public by properly regulating their members.

With your help, we gathered many examples of claims that you did not think were backed by good evidence or otherwise were not complying with the CNHC's Code of Practice or the Advertising Standards Authority's CAP Code. We highlighted some of these: Endemic problems with CNHC registrants.

That was nearly two years ago.

At the end of that chapter, the 100 initial complaints had been 'informally resolved' by the CNHC and our sample of ten of these that we did not believe had been properly resolved were on hold while we provided a list of the 'specific words' we had concerns about (even though we had already done that). We subsequently provided the CNHC with a list of specific words so that they could have no more excuses for not doing their job and dealing with our complaints.

Out of those ten, five were dropped because they were no longer CNHC members, leaving just five. We don't know why these five are no longer registered, but a 50% drop out is interesting. A manifestation of the OfQuack Paradox, perhaps?

If you remember, I provided the CNHC with screenshots of the pages I was concerned about with specific text highlighted in yellow, such as the one on the right. Click here to see that extract in the context of the complete page. Some pages had more text highlighted than others. 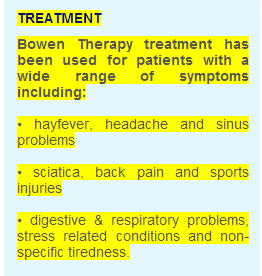 That was on 9 July last year, but the CNHC didn't even bother to look at them until January this year! How do I know? I provided the screenshots in a zip file placed in my Dropbox account. For some reason, Google's Chrome browser considered the file to be malicious but it downloaded correctly from Firefox and Internet Explorer. When the CNHC came to look at the file in January, they got an error message. Not knowing what caused this, they said:

In respect of the remaining five complaints, when I try to download via Dropbox the compressed file that contains screenshots of the web pages and copies of documents listed with highlighted text, using the link you sent me, I receive a ‘malicious download warning’. I would be grateful if you could check your zip file and send me a fresh link.

I carefully and deliberately asked:

Regarding the zip file, I don't understand what the issue is: can you tell me if you have had any trouble downloading the file previously?

I got the same warning message when I tried to download it originally but didn’t raise it with you at that time because you were stating then that your complaint was about every word on every page.

The CNHC never confirmed whether they did, finally, look at the screenshots I had provided.

However, on 5 February this year, I was told that the first complainant — a hypnotherapist — had provided:

…evidence that the wording on her website about which you complained is in line with very detailed advice that she received from the Committee of Advertising Copy Advice Team in December 2013. I can confirm that this complaint has been resolved informally.

A few days later, a second one was also 'informally resolved', the registrant having provided:

…published RCT evidence to support claims in respect of all but two of the 10 conditions/symptoms that appear on the acupuncture page on the Longfield Polytechnic website. The two are overactive bladder syndrome and temporomandibular (TMD/TM) pain.

References to them have been removed from the website page. I can confirm, therefore, that the complaint has been resolved informally.

A third was 'informally resolved' on 12 February; a fourth on 6 March and the final one on 20 March.

So, the CNHC were happy that they had informally resolved them and that these were now fully compliant. But did we agree?

We'll be saying more about the rest of them later, but, no, we don't think some of these websites are now fully compliant with the CNHC's own 'therapy descriptors', their Code of Conduct, Performance and Ethics or the ASA's CAP Code.

Let's look at the fourth one that the CNHC told us was now 'informally resolved'. This registrant's website, http://www.helenbarnard.co.uk/, made claims for Bowen therapy. If you've not heard of this particular 'therapy' before, take a few minutes to watch this video from the Bowen Therapy Professional Association, the trade body to which Helen Barnard belongs.

The screenshots of the three pages I sent to the CNHC on 09 July 2014 were (click to enlarge): 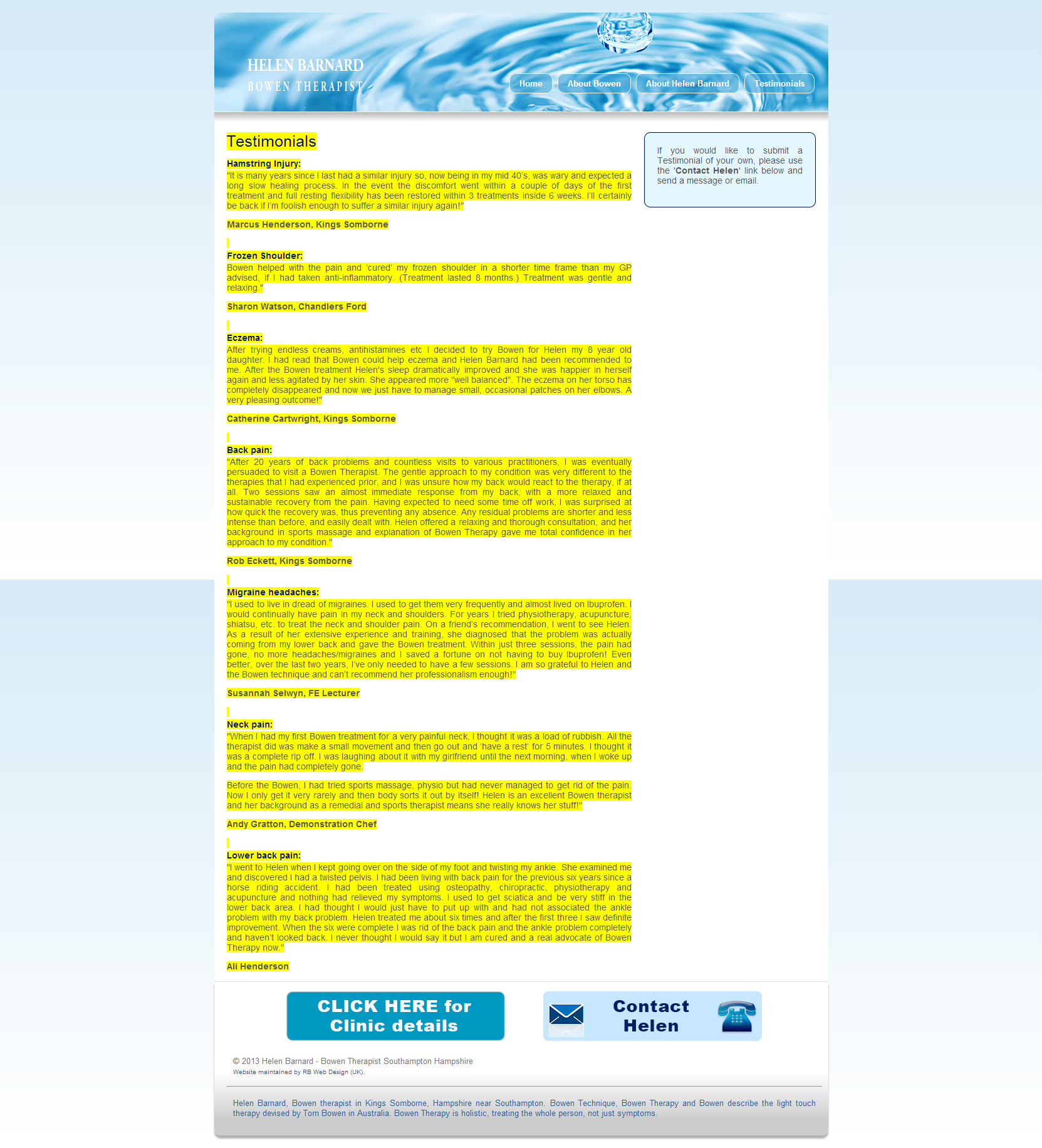 The specific words we highlighted to the CNHC on 04 December 2014 were:

Muscle and joint aches and soft tissue injuries including sports injuries, Any age group from babies to elderly, fit and healthy, to frail or chronically ill, Stress related problems from IBS to insomnia, Injury prevention for sports men and women

the relief of pain, improved range of movement and a general feeling of well-being and relaxation. , it is suitable for all ages and fitness levels, from young babies to the frail and elderly.  It can be used on acute injuries and sport injuries to chronic conditions.

The last ones were claims made in testimonials.

As well as their more general guidance and advice, the ASA have issued advice specifically for Bowen therapists:

This technique uses pressure to mobilise soft tissue.  CAP accepts that marketers can make claims about relieving stress or anxiety and helping relaxation.  In August 2012, the ASA upheld a complaint about general claims that the Bowen technique could increase flexibility and improve movement (The Bowen Consultancy, 22 August 2012).  Although it rejected some claims, the ASA accepted that the Bowen technique could improve flexibility, in the short term, of hamstring muscles in healthy, fit adults aged 18-50 years with no musculo-skeletal symptoms.  Claims to improve flexibility would need to be qualified in those terms. Neither CAP nor the ASA has seen evidence that the technique can treat other conditions and advertisers should not refer to conditions for which medical supervision should be sought (Howard Bult, 8 February 2012).

It should be clear to many that the claims made by Helen Barnard are problematic at best.

Having received advice from the Committee of Advertising Practice Copy Advice Team, Ms Barnard has removed from her website the following wording

"The subtle and gentle nature of Bowen treatment means it is suitable for all ages and fitness levels, from young babies to the frail and elderly. It can be used on acute injuries and sport injuries to chronic conditions. However, practitioners do not diagnose, nor do they prescribe or alter medication. They may recommend assessment by a Doctor. Bowen is not intended as a substitute for medical treatment."

"Gentle fingertip pressure in precise locations can help any age group from babies to elderly, fit and healthy, to frail or chronically ill."

and replaced it with

“The subtle and gentle nature of Bowen treatment means I have clients of all ages from young children to the elderly”.

She has also removed any reference to specific health conditions for which suitably qualified medical advice should be sought.

I confirm that this complaint has been resolved informally.

Here are the before and after screenshots of the changed text (click to enlarge): 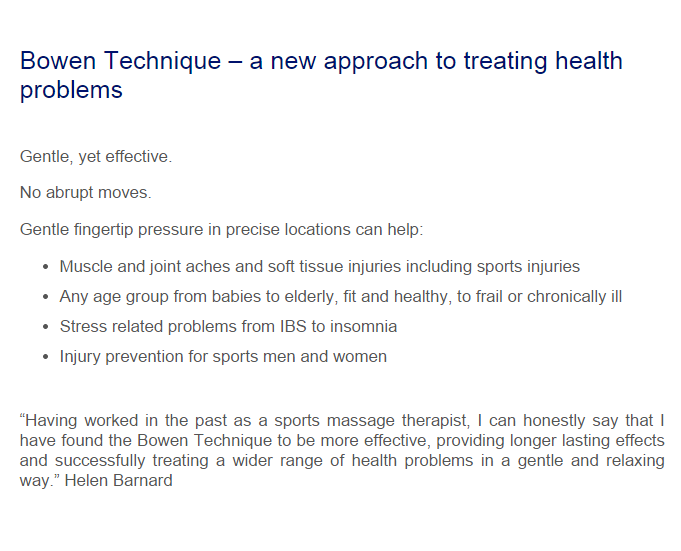 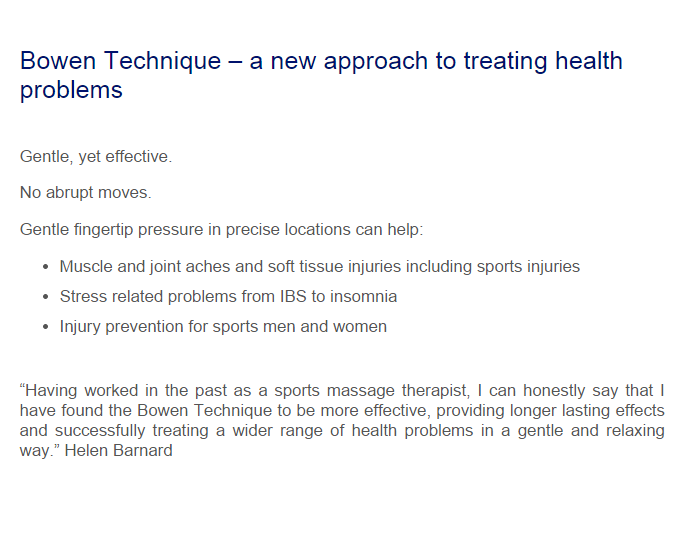 This was the only page to change but it's good to see that the advertiser removed some of these words. But why has it taken the CNHC two attempts to get this website changed? They have twice told us all the websites we complained about had been rectified and that they were now compliant.

But, even after all that, are they?

Before we look at that, the CNHC's phrase 'health conditions for which suitably qualified medical advice should be sought' is significant.

The ASA's CAP Code states that they will not allow many advertisers to make claims for some more serious conditions. In their Health, beauty and slimming marketing communications that refer to medical conditions Help Note, CAP provides two lists: the first identifies medical conditions for which medical advice from a suitably qualified person should be sought and the second identifies conditions which could legitimately be referred to in marketing communications without breaching Rule 12.2 (subject to them complying with all other appropriate Code Rules, of course). This Rule states:

Health professionals will be deemed suitably qualified only if they can provide suitable credentials, for example, evidence of: relevant professional expertise or qualifications; systems for regular review of members' skills and competencies and suitable professional indemnity insurance covering all services provided; accreditation by a professional or regulatory body that has systems for dealing with complaints and taking disciplinary action and has registration based on minimum standards for training and qualifications.

There are, of course, no medical conditions listed by the ASA that they would allow an advertiser of Bowen therapy to claim to treat.

But that's not the whole story. As well as 'health conditions for which suitably qualified medical advice should be sought', the advertiser listed other medical conditions that were not on the ASA's list — as shown on the screenshots above. Why weren't they removed? Why were the CNHC content with the advertiser removing just the more serious medical conditions? The CNHC seem to think they had done their job and declared the case closed.

We were not so easily convinced and we don't think that the CNHC should have been content either; not if they were competently doing their job of protecting the public, that is.

Running out of patience

But we're not the ones to judge these things: that's what the regulators are there to do. In fact all we are able to do is question claims made, submit complaints to the relevant organisation and let them decide according to their own rules and procedures.

We've been extremely patient with the CNHC and already given them two attempts and nearly two years to ensure the websites of the registrants we'd complained about were properly dealt with. We could see no point in trying a third time, so we've submitted complaints to the ASA who we know will deal with the issues professionally, competently and thoroughly, in the interests of protecting the public from misleading claims.

So far, we've submitted three complaints to the ASA about the websites that the CNHC have told us they are happy with and a fourth will be submitted soon.

The outcome of the first of these complaints — Helen Barnard's website — is published today as an informally resolved case. We'll tell you about the others once they've been resolved by the ASA — and what we propose to do subsequently.

Our ASA complaint was essentially about the same words and some claims made in a video on her website.

The ASA asked her to remove some claims from her website as they had previously been investigated and found to breach the CAP Code. They were going to ask her to provide evidence for the other claims, but she told the ASA she had taken her website down and that if it was live again, it would include her qualifications only.

As far as the ASA is concerned, the case is closed: the misleading claims are no longer being made.

As far as we're concerned, this is not the end.

What we have shown is that, despite the CNHC's assurances that her website was fully compliant, the ASA decided otherwise.

Who should we place our trust in? Who should the public place their trust in? One who sets high standards and adjudicates fairly to protect the public? Or one who claims to but seems to pay lip service to protecting the public from its members?

So, is the CNHC fit for purpose? That depends on whether their purpose is to protect the public or protect their members.

We'll leave you to decide.