We had hoped that all acupuncturists would have got the point after the adjudication by the Advertising Standards Authority (ASA) that upheld our complaint against the Royal London Hospital for Integrated Medicine (RLHIM).

It seems we were too hopeful.

Although we didn't know it at the time, it looks as if the acupuncture treatments that the RLHIM were advertising might well have been provided by the British Medical Acupuncture Society, run as a private clinic on the third floor of the building.

We'll return to that below, but first, we'll look at what goes on in the RLHIM building.

As part of our investigation into the RLHIM, we submitted a Freedom of Information Act (FOIA) request to UCL Hospitals NHS Foundation Trust (UCLH) and the neighbouring Great Ormond Street Hospital for Children (GOSH), which is run by a separate Hospital Trust. We wanted to find out about the RLHIM's hiring out of their building, how much was left for the RLHIM's own activities and what income they received from this. Of course, the RLHIM don't actually own the (seven-floor) building they use — it's owned by UCLH. 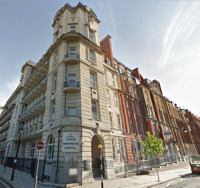 We now know that:

We were unaware that the BMAS rented a room at the RLHIM when we submitted our ASA acupuncture complaint, but even Google knew — click on the map! But I'm sure the irony of an organisation called the The Advertising Protection Agency (wrongly) shown as also being at the RLHIM will be lost on no one.

This means the RLHIM shares the lower ground and ground floors, some of the consulting rooms on the third and has part of the second floor for its own use.

This also means that the RLHIM has no exclusive use of any of the seven floors of its own building.

We have figures for the floor areas that GOSH rent and, making a few assumptions, we estimate that the RLHIM only uses about 60% of its own building, sharing it with others.

Into this, they squeeze the following clinics and facilities:

There may be a few other clinics there as well, but they seem to have withdrawn the advertising for their Marigold Foot, hypnotherapy, western herbal and, of course, their acupuncture clinics for some reason…

(GOSH, of course, don't provide any treatments to children that are available at the RLHIM.)

CAMLIS must take up a good bit of space on the ground floor since it contains:

But, what if the RLHIM was to shut up shop? Perhaps more space could be rented to other hospitals? Even at the rate paid by GOSH, this would earn UCLH just under £1 million a year; rent it out at commercial rates for the area of Bloomsbury and it could increase UCLH's coffers by a cool £2.8 million per annum. Just imagine what UCLH could do for patient care with that amount!

But back to the acupuncture clinic.

The FOIA response told us the British Medical Acupuncture Society run an acupuncture clinic in a room on the third floor of the RLHIM building. They call it their London Teaching Clinic, claiming:

The BMAS runs an acupuncture teaching clinic in the centre of London. This clinic is established as a centre of excellence for acupuncture treatment in the heart of London and provides a training base for medical acupuncturists.

The BMAS is working to integrate acupuncture within the NHS. However, at present patients at the London Teaching Clinic are treated on a private basis. The Clinic operates on a not-for-profit basis and charges are relatively affordable.

Now, it may be that the RLHIM's Group Acupuncture clinic was run by RLHIM staff and not the BMAS, but, since the BMAS have run their private clinic in the RLHIM for some ten years, it seems highly unlikely that they were unaware of the ASA's investigation into the RLHIM's group acupuncture clinic. Indeed, the RLHIM submitted some 43 papers trying to substantiate the claims they were making — would they not have informed or consulted the BMAS, particularly when the latter claim to be:

…a nationwide group of about 2300 registered doctors and allied health professionals who practise acupuncture alongside more conventional techniques.

That would appear to be right up the RLHIM's street, since they claim to offer:

…a range of therapies which are fully integrated in to the NHS and with conventional medicine.

All therapies are provided by registered health professionals who have additional training in complementary medicine.

Anyway, the BMAS were claiming they can treat a range of conditions that were very similar to those claimed by the RLHIM.

In their London Teaching Clinic leaflet, they said:

What sort of conditions respond to acupuncture?

Acupuncture appears to be effective in a wide range of painful conditions and is commonly used to treat musculoskeletal pain: for example – back and leg pain, shoulder pain, neck and arm pain. It has been successfully used to treat headaches, migraines, trapped nerves, chronic muscle strains and various kinds of rheumatic and arthritic pain.

Some other situations in which acupuncture might be used are:

This is not a complete list and many other conditions have been treated with acupuncture.

They made almost identical claims in their Patient Info leaflet.

In the ASA's adjudication of the RLHIM's acupuncture clinic, they included both the Group Acupuncture clinic leaflet and their Traditional Chinese Acupuncture (TCM) [sic] leaflet. The ASA, after examining all the evidence the RLHIM provided and after consulting an expert, concluded that the RLHIM had not substantiated the claims they had made and were told to remove them all.

The TCM leaflet made claims about:

And the other leaflet:

The acupuncture at RLHIM is Western Medical acupuncture. It has been proven to be effective in the treatment of pain and muscular spasm ... Group Acupuncture Clinics are offered for: - Chronic Knee Pain (including knee osteoarthritis) - Chronic Musculoskeletal pain (including back and neck pain) - Chronic Headache and Migraine - Menopausal complaints (including hot flushes) - Facial Pain".

We leave it to you to spot any similarities between these and the claims the BMAS were making.

We also questioned the claims in their Acupuncture Referral Guidelines — many overlapped those in the other two leaflets, but this was a far longer list that started by stating:

The following is a list of conditions, diagnoses and symptoms for which acupuncture treatment can be used. The categories are placed roughly in order of response rate, starting with the highest.

They didn't say what evidence they used to determine the response rates.

However, the ASA concluded that it was not within their remit because it was addressed to medical practitioners rather than the general public. We argued that there was nothing to say it was and that it was available to anyone. The ASA were not convinced by our argument and so dropped this part of our complaint.

The ASA intended to deal with our complaint under their formal investigations procedure, asking the BMAS to comment on our complaint and provide evidence to support their claims.

However, the BMAS eventually decided to simply assure the ASA that the claims investigated and similar claims would not appear again.

It might have been interesting to see what evidence the BMAS provided to the ASA and see if it was any different to that supplied by the RLHIM, but, in the end, the outcome would almost certainly have been the same: the misleading claims are removed.

So, today, the British Medical Acupuncture Society are listed on the ASA's website as having informally resolved the case.

But have the BMAS kept their promise to remove the claims?

A new London Teaching Clinic leaflet (cached) was created on 01 May 2014, very shortly after we submitted our complaint, but we don't know if changes were made because of our complaint. However, the new leaflet states:

What sort of conditions respond to acupuncture?

Acupuncture is proven to be effective in a wide range of painful conditions and is commonly used in short term relief of musculoskeletal pain, including chronic low back and neck pain, knee osteoarthritis pain, migraine and tension–type headache, and temporomandibular (jaw joint) disorders (TMD)

Some other situations in which acupuncture might be used are: the symptoms of overactive bladder syndrome; shoulder pain; nausea and vomiting.

Research has shown that there may be benefits to women’s health particularly in women with polycystic ovary syndrome. In this situation acupuncture can improve ovulation rates and beneficially alter hormone levels.

Clinical research has yet to confirm whether or not acupuncture is useful a useful therapy to aid weight loss, control appetite or help with smoking cessation.

Their Patient Info leaflet (cached) was also updated on the same day. The first and last sentences are the same, but the middle two are oddly different:

Some other situations in which acupuncture might be used are: improvement in the symptoms of overactive bladder syndrome; elbow and shoulder pain; facial and dental pain; nausea and insomnia.

Research has shown that there may be benefits to women’s health including treatment for painful periods; fertility issues and IVF; menopausal conditions such as hot flushes and night sweats.

The ASA's current guidance on acupuncture (which extensively cites our RLHIM adjudication) states:

In light of the evidence reviewed, CAP accepts that practitioners of acupuncture may provide the following:

It is possible to advertise the purely sensory effects of acupuncture and make claims about well-being and well-feeling or to use phrases such as “feel revitalised”, “more positive” or “relaxed”. The ASA is yet to be presented with appropriate evidence that acupuncture can be beneficial for those suffering from dental pain and nausea and advertisers should ensure they hold robust evidence before making such claims.

Their leaflets are certainly an improvement on the previous ones, but they still contains claims that don't match what the ASA says are acceptable.

We'll be bringing this to the attention of the ASA and let them decide if they agree with our concerns.

When they again update their leaflets, perhaps the BMAS will take the opportunity to make similar changes to other pages on their website — such as Patient Information and Questions?