The adjudications by the Advertising Standards Authority about claims made by homeopaths and the Royal London Hospital for Integrated Medicine have all been published, so why were the Glasgow and Bristol Homeopathic Hospitals still making questionable claims? 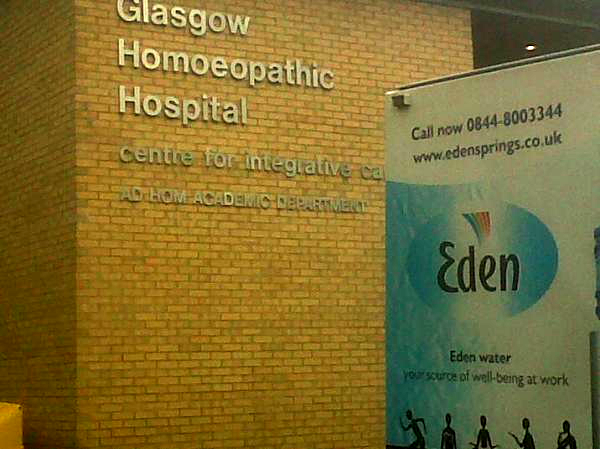 We won ASA complaints last year over claims made by the Royal London Hospital for Integrated Medicine (RLHIM) about Medical and Clinical Hypnosis, Acupuncture, Western herbal medicine and marigold therapy. The ASA has also ruled on complaints about claims for homeopathy made by the Society of Homeopaths, homeopath Steve Scrutton (and again) and the homeopathy lobby group Homeopathy: Medicine for the 21st Century.

There's been the House of Commons Science and Technology Select Committee Evidence Check on homeopathy in 2010 that concluded:

11. In our view, the systematic reviews and meta-analyses conclusively demonstrate that homeopathic products perform no better than placebos.

The ASA also offer advertising advice about a wide range of alternative therapies and there are our other successful complaints to both the ASA and the medicines regulator, the MHRA.

So it comes as a surprise to find another two NHS hospitals making claims in a leaflet and on their websites for homeopathy, holistic approaches to cancer and depression, acupuncture, allergies and anthroposophic medicines (including mistletoe therapy for cancer).

Part of NHS Greater Glasgow and Clyde, the GHH is located on the site of Gartnavel General Hospital. Like the Royal London Homeopathic Hospital, they are trying to re-brand themselves as the Centre for Integrative Care. It has itsown websitewhere you can take a tour of their very nice Healing Space (as they call it), opened in 1999 at atotal capital and building cost of £2,780,189 and costing the NHS over £2 million per annum in running costs.

We've already seen the decline in homeopathy prescriptions on the NHS in England and Wales and this was examined further by Nancy K on her Evidence-Based Skepticism blog: Homeopathic harms vol. 8: Opportunity costs.

An FOIA request in 2011 by A Cuerden revealed some interesting figures for the GHH. The following charts show the number of new outpatient attendances, drawn from all over Scotland. There is certainly a decline as expected, but what is also interesting is to look at the number of return attendances — or rather the ratio of total attendances to new attendances. This is shown in the second chart, along with the trend.

The correlation coefficient between these two sets of data is -0.75. There could be several explanations for the increasing number of return attendances: one might be that their treatments are becoming less effective over time, requiring further sessions by patients, but other interpretations might spring to mind…

But it seems it's not just us who are pondering the future of the GHH: the building could be put to some good use as Scotland's first dedicated centre for chronic pain.

A similar FOIA request about the BHH tells us it costs around £350,000 per annum to run and gives some more interesting charts:

It's clear where they are headed.

Getting back to the claims they were making, we were not convinced that the GHH or the BHH held the necessary evidence to substantiate them, so we submitted two complaints to the ASA: one about a GHH leafletwe obtained and a number of pages on their website and another complaint about claims on the BHH website.

The GHH say they provide a wide range of therapies: "Mindfulness Based Cognitive Therapy, Heartmath, Counselling, Art and Music Therapy, Physiotherapy, Therapeutic Massage, Allergy therapy and Anthroposophic medicine and complementary therapies such as Acupuncture, Homeopathy and Mistletoe Therapy." A few of these do have some good evidence behind them; others less so.

In their homeopathy leaflet, they stated:

in out-patients, we see as full a range of conditions as a typical GP and are happy to treat any and multiple illnesses.

some examples of the problems we treat:

dermatology such as eczema, acne, psoriasis…

gynaecology such as pms, endometriosis, menopause…

gastroenterology such as IBS, IBD…

allergies at a specialist allergy clinic

neurology, such as headaches, neuralgias, symptoms associated with MS…

psychiatry, such as anxiety, depression…

rheumatology, such as fibromyalgia, symptoms associated with, RA, OA…

We challenged all these claims, including their claim that they see "as full a range of conditions as a typical GP and are happy to treat any and multiple illnesses".

The ASA passed some of the points we made straight to their Compliance Team because they were clearly in breach of the ASA's guidance. They were going to fully investigate many of the other points we raised and asked the GHH for their response. However, that seems to have changed: they have now informally resolved the case with the ASA and have agreed to amend their website to comply with the ASA's guidance. The GHH is listed today on the ASA's website as one of their informally resolved cases, listed as NHS Greater Glasgow and Clyde.

We would have liked the ASA to have produced an adjudication so we could see how the GHH tried to substantiate their claims, particularly for mistletoe therapy, Heartmath, anthroposophic medicine as well as their more general claims. However, part of the ASA's job is to prevent the public from being misled and if it can do that by informally resolving complaints and having the claims withdrawn rather than by launching a full investigation, it usually means compliance is achieved more quickly. The end result is the same: misleading claims are removed.

The GHH have already made some minor changes to their website: their "Acupuncture", "Allergy Service" and "Anthroposophic Medicine" pages all changed on 01 April. We do not believe the pages are compliant yet and will continue to monitor them, so we may make further complaints to the ASA.

Homeopathy is useful in the management of:

Because the ASA had already had a settled view on the evidence for homeopathy for these conditions, it was referred immediately to their Compliance Team to deal with. They haven't yet removed these from their website, but we'll leave it to the ASA to deal with that. We will, however, continue to monitor their website.

So, these are another two wins for us to add to the growing list — it is just unfortunate it took a complaint from us for these misleading claims to be removed.

Our friends at the charity HealthWatch (they are in no way connected with any NHS Healthwatch body) ran a pilot study a few years ago on the effectiveness of consumer protection laws for regulating false claims of health benefits. They found that Trading Standards took very little decisive action, and avoided using the newest and most rigorous legislation.

A much larger study is now being set up, and this will require a lot more help from volunteers. HealthWatch needs maybe 50 people to submit complaints to Trading Standards and to monitor progress over six months, using an online system.

If you would like to participate in this exciting project, please contact HealthWatch trustee This email address is being protected from spambots. You need JavaScript enabled to view it.. 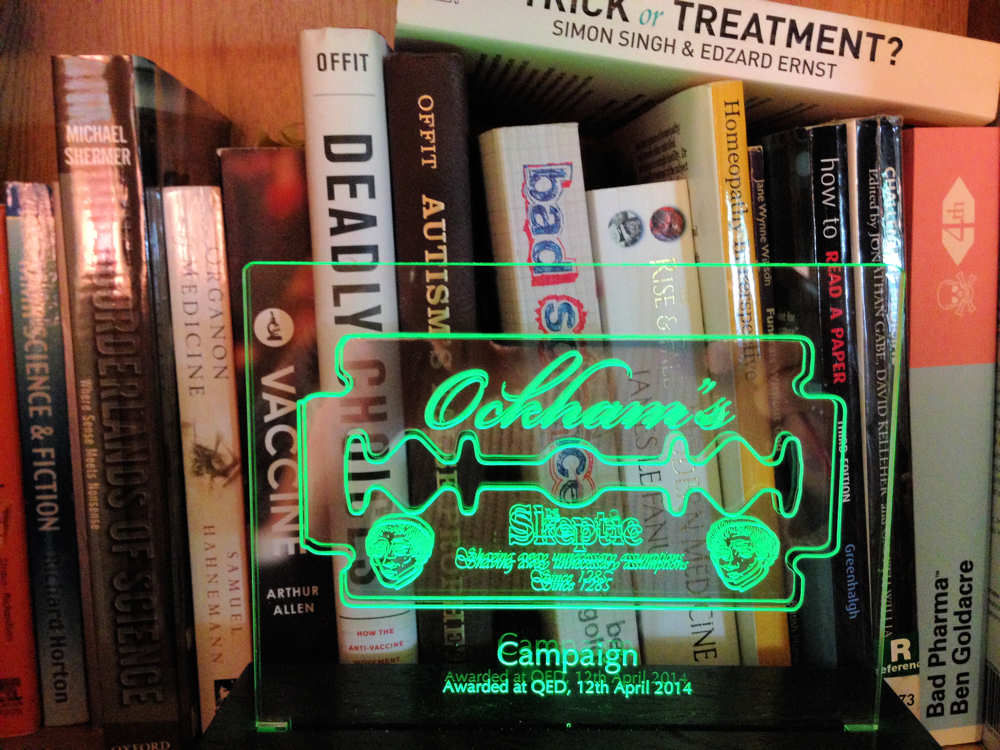 Thanks to all who nominated and voted for us in the Skeptic magazine's Ockham Awards for Best Skeptic Campaign 2014. And, of course, thanks to Simon Singh for getting us set up and for his continuing support.

We were honoured to be presented with the award at the QED Conference in Manchester on 12 April by Robert Llewellyn, star of Red Dwarf and Scrapheap Challenge and evangelist for electric cars.

This was the third year running we had been nominated, but we managed to see off stiff competition from the other nominees: Guerrilla Skeptcism (US), the Houston Cancer Quack (US) and the Cosmic Genome (UK).

The award now takes pride of place on our bookshelf.