Herbalism on the NHS: complaint upheld

Our fourth complaint against the Royal London Hospital for Integrated Medicine shows yet another a very fragile evidence base — but what will UCL Hospital Trust do about it?

Of all the complementary and alternative therapies, herbalism remains much the odd one out — there is at least some prior probability that many plants or plant extracts will have a pharmacological effect on humans. Indeed, there is some evidence that some herbal products have beneficial effects. There is, of course, also good evidence that many herbal products are dangerous and can cause severe side effects, even death. And that's ignoring the adulterated and contaminated products.

The appeal to nature fallacy abounds amongst many promoters of herbal products, but natural implies neither efficacy nor safety — each claim must be looked at separately and the evidence considered.

When we came across a leaflet advertising the Western Herbal Medicine service of the Royal London Hospital for Integrated Medicine (part of UCL Hospital Foundation Trust), we wondered if they could substantiate the claims they were making. So we submitted a complaint to the Advertising Standards Authority (ASA), who regulate advertising.

That was three years ago, and, after a long and thorough investigation, the ASA's adjudication on our complaint is published today, upholding 10 out of 11 points.

Conditions particularly suitable for treatment by herbal medicine are:

Before looking at the evidence provided, it's worth pointing out the RLHIM's definition:

Western Herbal Medicine usually consists of a bottle of alcohol-based tinctures, with up to five different herbs mixed together.

We will have more to say about the quality of some herbal medicines used at a later date.

The ASA challenged each of eleven conditions and asked the RLHIM to provide evidence for all of them.

We can only assume, knowing what was at stake if they were to lose the adjudication, that RLHIM would have ensured that the best evidence available was provided. Indeed, RLHIM stated that:

…the body of evidence supported the claims that herbal medicine could be used to treat the listed conditions.

The ASA and their expert disagreed.

RLHIM provided a total of 69 papers in support of their claims.

Many of the other claims were similarly unsubstantiated because of the broad nature of the claim: urinary disorders, allergies, joint problems, skin conditions and recurrent infections.

No doubt, if they re-publish the leaflet, they will be able to limit their claims to the specific conditions they have good evidence for, but, instead of the rather wide-ranging impression given on the original leaflet, a rewritten one might look a bit sparse.

It's instructive to note the assessment of many of the papers that the RLHIM provided. Remember that the ASA require an advertiser to hold — at the time they make it — robust scientific evidence for any claim. It's made very clear that unblinded, uncontrolled, non-randomised trials are likely to be unacceptable. Yet the ASA comments reveal what they thought of much of the RLHIM's evidence:

all had flaws in their methodology

the test material was not precisely defined

The other RCT also lacked from precise product definition.

The systematic review was also lacking in detail and robustness.

We did not consider the general treatment review to be useful in supporting the claims in the ad because, unlike an RCT or a systematic review, it did not analyse any data

a general treatment review looking at complementary and alternative remedies

some studies of poor methodological quality

overall the evidence was not sufficiently robust

half of the studies submitted lacked sufficient details on design, methodology and/or statistical analysis to be considered suitably robust.

Other weaknesses…included small sample sizes, short durations and populations that might not have been representative of the typical patient population

The evidence for the remaining herbal medicines was weak.

most of the studies provided were of a poor methodological quality, with limitations including flaws in the statistical analysis, small sample sizes and short treatment durations.

the authors of the ginseng study concluded that that study alone was not sufficient in demonstrating the overall efficacy of Siberian ginseng in reducing fatigue.

both studies contained a number of weaknesses that limited their usefulness as evidence for the claim: these weaknesses included: small study sizes; short study durations; lack of a demonstration of statistical significance; lack of power calculations and a lack of detail on methodology and randomisation.

It is damning that this is the best evidence that an NHS hospital can come up with for the treatments it provides at the taxpayer's expense. But, even though there is at least a level of plausibility of herbal products, the RLHIM wasn't able to do much better than it was for acupuncture.

The RLHIM provided evidence that kava kava was effective for anxiety — even though this was for the claim about stress, not anxiety. However, that would be fine except that the medicines regulator banned the sale, supply and importation of any kava kava based product in 2002 because of widespread concerns about its hepatoxicity. So, even if it is effective, the RLHIM would not have been able to legally prescribe it. The ASA, rightly, rejected this as evidence for the claim.

But they were able provide evidence that satisfied the ASA for their claim about migraines, so the ASA did not uphold this point. However, the reports provided for migraine prophylaxis (ie prevention of migraines), not relief of migraines themselves. We argued that a reader would infer from the claim for migraines, that they could provide a herbal medicine that would alleviate a migraine headache. The ASA were not persuaded by our argument.

In an attempt to substantiate their claim about 'recurrent infections', the RLHIM provided evidence for acute bronchitis, acute rhinosinusitis, acute respiratory infection, the common cold and upper respiratory tract infections. The ASA accepted some of this (including the use of Echinacea for the common cold) and rejected others. However, the ASA noted that the claim was for the treatment of 'recurrent infections' not just these respiratory conditions. The ASA therefore ruled that the claim was misleading.

It should also be noted that, as an NHS hospital, referrals to the RLHIM for treatment can only come from your GP or an NHS consultant. It does not seem likely that a GP would refer you to the RLHIM just because you had a cold — recurrent or otherwise. After all, Echinacea products are easily available from any supermarket.

The ASA upheld the complaint on 10 of the 11 points, declaring that the RLHIM ad breached the CAP Code on no less that 30 counts.

The ASA told the RLHIM:

The claims investigated and found to be in breach of the Code must not be used again. We advised UCLH to take care in future advertising not to over claim when making general claims for services using herbal products.

But, having looked at the evidence supplied, they also said:

Conditions for which some herbal medicines were found to have some effect included: functional dyspepsia, IBS, premenstrual syndrome, back pain and OA, depression, some forms of acute infections including acute rhinosinusitis, the common cold, uncomplicated upper respiratory tract infections, influenza types A and B and migraine.

So, this should now form part of the guidance for advertisers and we expect CAP to update their guidance. All other advertisers of herbal products should now take note and ensure their websites, leaflets, etc comply.

We don't know exactly what papers the RLHIM submitted, although an FOIA request  — or a bit of detective work on Pubmed — would disclose them. But some of the herbal extracts in those papers are identified in the ASA adjudication.

However, what the RLHIM provided was a list of papers that tried to substantiate the claims made in the leaflet: what is not entirely clear is whether the herbal products in those papers are actually the ones used by the RLHIM in their treatments. For all we know, they may provide completely different herbal treatments — indeed, that may be even quite likely given the difficulty they appear to have had in coming up with good evidence.

So, it is left as an exercise for the reader to marry up the products mentioned in their evidence with a list of herbal products stocked at the RLHIM, obtained through an FOIA request earlier this year — this spreadsheet contains all the data.

Now that we have had three adjudications and one informally resolved case covering four RLHIM leaflets, we can step back and look at how the RLHIM has fared:

The RLHIM have also been told to change their claims for craniosacral therapy and reflexology in line with our master complaints.

We did look at their leaflet advertising their homeopathy services, but it made no substantial claims about homeopathy.

This now leaves their website and their leaflet collection looking a little sparse — many website pages (such as their reflexology page) now only link to a login page so that the content is hidden from public view.

These successes have all been through complaints to the ASA. But we have also been using the medicines regulator, the MHRA, and the HCPC (the regulator of podiatrists and chiropodists and other healthcare professions) to ensure that the unlicensed Marigold Therapy products are only used and advertised by those legally entitled to do so. Since most podiatrists and chiropodists are not permitted to supply unlicensed medicines, we reported 39 websites advertising Marigold Therapy to the HCPC and we will report more on this part of the campaign in a future newsletter. 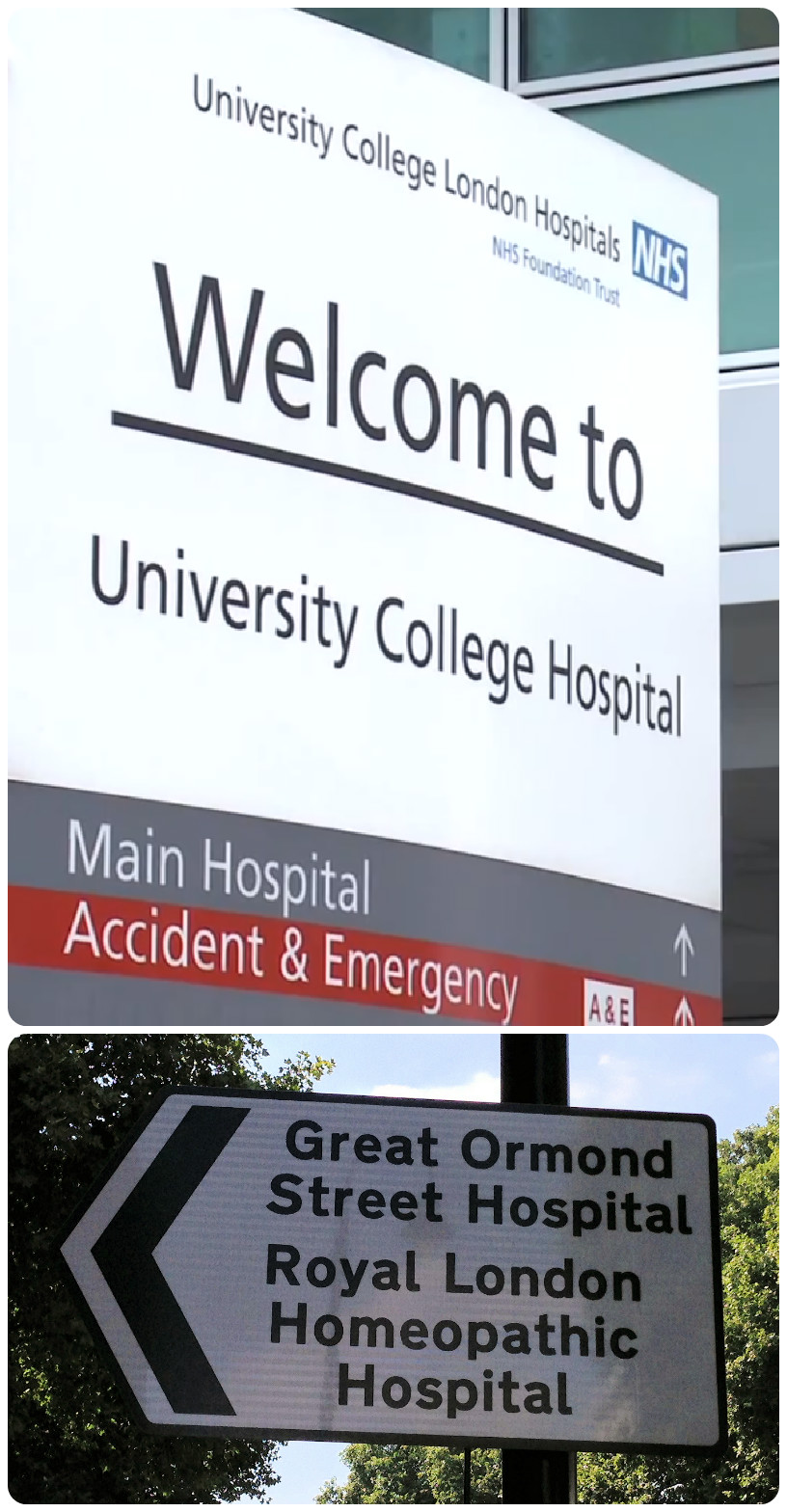 But of course, this is not just about the words they use in their leaflets or on their website.

At what must surely be the most prestigious and highest-profile organisation promoting and using all sorts of alternative therapies, it should have been straightforward for them to defend the claims they made. But as we've already seen, they were unable to provide the quality of evidence required by the advertiding regulator.

What is more worrying is the potential lack of good evidence for the treatments they use on their patients.

This cannot be good for the public who are referred to the RLHIM: if they don't have the evidence for the treatments they provide at the tax-payer's expense, then why are they providing these treatments at all?

And, as one of the hospitals within University College London Hospitals NHS Foundation Trust, their Board of Directors and Governing Body must now ask important and long-overdue questions about the evidence base for all treatments provided at the RLHIM.

They may have simply tolerated the historical anachronism that is the RLHIM up till now, but, after this latest round of embarrassment for UCLH, it is surely about time these fundamental and serious questions were asked and decisive action taken.