Back in October, we told you of the complaints about the 26 adverts in the first two issues of the new monthly magazine What Doctors Don't Tell You we submitted to the Advertising Standards Authority (ASA).

The ASA have been working on resolving our complaints and have started dealing with just about all of them.

Many will be informally resolved by the advertiser agreeing to remove the claims the ASA find unacceptable.

Others are being fully investigated by the ASA, asking the advertiser for the evidence to substantiate the claims made — remember that an advertiser must hold that evidence at the time the claim is made, not just come up with it later when challenged. If they cannot supply that evidence or it is not up to the ASA's standards, they are likely to lose the adjudication with full details published on the ASA's website for all to see.

Today, the first two of the informally resolved cases are published. 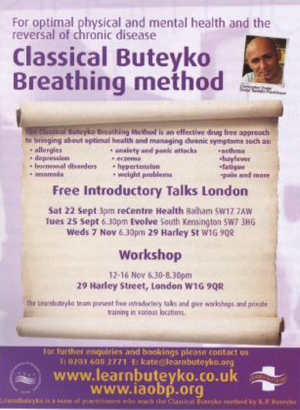 The Buteyko Breathing Method purports to be a breathing technique that can help with conditions such as asthma.

The claims this ad in WDDTY made went well beyond this:

The Classical Buteyko Breathing Method is an effective drug free approach to bringing about optimal health and managing chronic symptoms such as:

The ad appeared in the September issue of WDDTY. There were smaller, 1/8-page ads in the first three issues, but these made no claims.

We questioned these claims. The ASA agreed with us that we had a valid point and told the advertiser to change their ad, instructing them to remove all efficacy claims for the technique.

Because it was informally resolved, all the ASA publishes is basic details of the case — but the advertiser is still named.

Similar claims are made on the learnbuteyko.co.uk website and we hope the advertiser will take this opportunity to ensure the website also complies with the ASA's CAP Code. 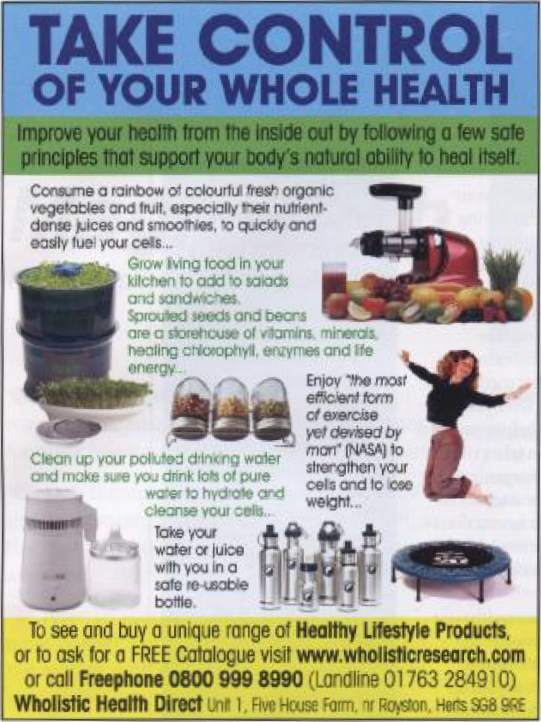 There were two different ads in the first issue and one of them repeated in the second, all making the same claims. The ads were by Wholistic Research for their water filter product.

We challenged the claims and said we believed it could make readers worry unnecessarily about their drinking water and put undue pressure on them to buy the product.

The ASA initially decided to investigate and ask the advertiser for evidence. However, the advertiser agreed to change the wording in future ads to resolve our complaint.

The advertiser should now be well aware of the ASA's CAP Code and I hope they will ensure that the ad on their website for their water filters also complies.

There are many more informally resolved complaints and adjudications to come and it will no doubt take some time, but we will let you know the progress.

Meantime, we will not be complaining about any of the ads in the latest (November) issue. The ASA need time to do their job and deal with the advertisers — and with the magazine publishers if necessary — to ensure that the ads in any future issue comply with the CAP Code.

However, we are keeping a detailed tally of the ads. In the September issue there were 38, 35 in October and 35 in November. Many of these ads are the same or very similar, but what is interesting is that there are only 39 different advertisers in total over the three issues. Out of 100 pages per issue, that doesn't seem like very many.