We begin with an update of the Tamsin Marshall reflexology website we reported on in a previous newsletter.

This was one of the three websites for our master complaint on reflexology to the ASA. Although the website changed before the ASA's adjudication was published — removing a reference to cancer — many of the misleading claims we complained about remained (see right).

We are pleased to see that this list of misleading claims has finally been removed. 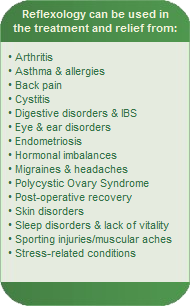 However, it's disappointing to see many of these claims are still there (cached) in a slightly different form:

Do you suffer from insomnia or fatigue? Are you prone to recurrent infections, mild or chronic illnesses? Are you trying for a baby, or currently pregnant? Are you suffering from hormonal imbalances or thyroid problems? If so, Reflexology may be just what you and your body needs.

If you would like to discuss your treatment or make an appointment please email.

Reflexology encourages and supports the body in its own healing process, as well as improving blood circulation, assisting in the removal of toxins, inducing relaxation and restoring balance to organs and glands.

It is widely acknowledged that Reflexology is effective not only in helping the body to heal, but also as a source of preventative health care and improved physical fitness. By supporting the mind and body, Reflexology encourages optimum health.

Since these are virtually identical to the claims the ASA ruled were misleading, it looks like this reflexologist still has a lot of changes to make to comply with the adjudication against her. We have informed the ASA.

There can't be many people who believe there is no need for an advertising regulator. A quick glance through the ASA's adjudications gives an indication of what it might be like if there was a free-for-all. Should advertisers of double glazing, car insurance, washing powder, weight-loss diets or penis enlargements be free to claim whatever they like about their product or service? Are exaggerations, half-truths and downright lies acceptable?

No, there needs to be effective regulation that protects the public from the excesses of the marketing machine.

There are several possible models for regulation including one set up under legislation with legal powers to ensure and enforce compliance. However, the ASA is set up as a non-statutory regulator:

We are independent of both the Government and the advertising industry…

They are, of course, funded by a levy on advertisers. How else could they be funded? Who else would be willing to pay for the essential work they do?

Advertisers can choose to pay this levy, but they cannot choose to comply with the Advertising Codes or the ASA's rulings — compliance is mandatory.

However, finance is raised by arm's-length boards (one for broadcast and one for non-broadcast) so that those who investigate and adjudicate on advertising are completely unaware of who has provided the funding.

That separation gives them the necessary independence and authority.

Their job is to:

…make sure all advertisements are legal, decent, honest and truthful.

Very simple requirements; and ones that the public has a right to expect in all advertising, regardless of what it's for or where it appears.

But even though the ASA is a non-statutory body, it has considerable weight — a point that would appear to need highlighting to some CAM advertisers, some of whom have even proclaimed that there is no need to comply with the ASA's CAP Code and advise others to ignore any letter from the ASA. Some have even involved their lawyers.

The ASA outlines the strong basis for their authority:

Interaction with the law

Across the European Union (EU) there is a unified piece of consumer protection legislation to prevent the use of misleading or unfair trading practices. This law, called the Unfair Commercial Practices Directive, has been translated into UK law to make sure that we have the same rules as all the other countries in the EU.

The ASA works within this legal framework to make sure that UK advertising is not misleading or unfair. The ASA is able to refer advertisers who refuse to work with us and persistently make misleading claims to the Office of Fair Trading (OFT) for legal action. The OFT is able to act under the Consumer Protection from Unfair Trading Regulations 2008, which governs how businesses interact with consumers and the Business Protection from Misleading Marketing Regulations 2008, which govern how businesses advertise to each other.

The ASA is considered the ‘established means’ for gaining compliance with both these pieces of legislation. This means that the law itself is not usually enforced formally through the courts; instead the ASA is first allowed to tackle any problems under the Advertising Codes. This approach works well in the overwhelming majority of cases. The ASA is able to take action quickly and this avoids clogging up our court system.

Referral is rarely necessary, as most advertisers prefer to work with the self-regulatory system. Since 2000 around thirty advertisers have been referred to the OFT; in the same period the ASA has dealt with around 200,000 complaints.

In a nutshell: the vast majority of advertisers are responsible and work with the ASA, but the ASA have the option and authority to take strong action should that prove necessary.

The Alliance for Natural Healthcare (a pressure group of herbal and supplement manufacturers, retailers and supporters) recently pronounced:

…the CAM community don’t regard the dissemination of information that relates to their practice as ‘marketing’ in the way interpreted by the ASA.

That so many CAM practitioners have responded positively to complaints would suggest there are many in the CAM 'community' who would disagree with this generalisation and who realise that to be socially and ethically responsible, they have to abide by the ASA's rules.

However, other CAM practitioners demand that they be considered a special case; that they shouldn't be regulated to the same set of rules as everyone else.

To accept a lower hurdle for CAM would put the public in even more danger of being misled. Indeed, because of the possible effects on our health and wellbeing, a case could be made for a higher level for healthcare claims.

The ASA only demands that claims about CAM meet the same evidential requirements as all other advertisers. No special pleading is allowed because they think they work in some alternative paradigm.

It's clear that there are many CAM practitioners who agree that advertising should be legal, decent, honest and truthful and that advertising rules must be applied equally and fairly to all adverts — whatever they are for.

That is all the Nightingale Collaboration is seeking.

In addition to their existing sanctions, on-line advertisers who have failed to abide by the ASA's adjudications can be listed on their Non-compliant online advertisers page. However, they also have other sanctions available to them including:

Since the ASA's agreements with search engines include Google, advertisers should not underestimate the effect these might have on visitors to their website.

Five out of the 14 advertisers currently highlighted on their Non-compliant online advertisers page fall into the alternative therapy category and include one advertising detox foot pads, two advertising reiki and one advertising liquid chlorophyll. The latest additions include Ionic Balance and an 'osteomyologist'.

Ionic Balance were advertising a plastic bracelet, promising all sorts of medical benefits, saying it produced 'negative ions, far infrared rays [heat] and alpha waves'. It would require a source of power to produce any of those and there is no evidence that, even if it did emit these, it had the benefits claimed for it.

The osteomyologist, Back Trouble UK, claimed they could treat:

These bear more than a passing resemblance to the types of medical conditions that some chiropractors and osteopaths have claimed. Many chiropractors have removed lots of claims — although there are still far too many questionable claims — so perhaps it's time for the osteomyologists to fall in line and abide by the rules?

As part of our plans for the coming year, we could do with some legal help. We need a lawyer who either already knows all about the Consumer Protection from Unfair Trading Regulations 2008 or who is willing to become familiar with them.

If you can help or know someone who might be able to assist us, please contact us.