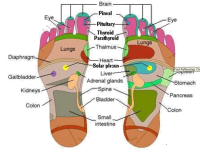 The first Advertising Standards Authority (ASA) adjudication on a complaint submitted formally by the Nightingale Collaboration is published today.

It was notable that — no doubt emboldened by recent articles in the Dail Mail1,2 — a great many practitioners claim that reflexology (or 'reproreflexology') can in assist conception in couples undergoing fertility treatment. (Searching for 'reflexology infertility site:.uk' on Google gave us over 36,000 hits.)

And, much like homeopaths and other alternative and complementary therapists, reflexologists also frequently include lists of named conditions — many of them serious — on their websites and either imply or state in no uncertain terms that they can treat these conditions.

In the adjudication against Jackie Ginger Reflexology, the ASA Council upheld our complaints about the claims made by the practitioner to be able to treat the conditions named on her website, firstly, were unsupportable and, secondly, might discourage people from seeking necessary medical treatment.

Customer testimonials of the kind expressly disallowed by the ASA Code of Advertising Practice (the CAP Code) also featured on many of the sites we looked at. The CAP Code does not allow marketers to use customer testimonials as a way of making claims that they would not otherwise be permitted to make and, in this case, the ASA treated the claims made in the patient testimonials on Jackie Ginger Reflexology as a separate item and challenged these claims on their own behalf.

Unsurprisingly, this challenge was also upheld by the Council.

The full adjudication can be viewed here and we expect the other adjudications to be published shortly as well as our master complaints for other therapies.

We hope that other reflexologists will take serious note of this decision because it sets a precedent and adds to the ASA's existing guidance on reflexology.

We also supplied the ASA with a list of reflexologist trade bodies (including the International Federation of Reflexologists, the Association of Reflexologists, the British Reflexology Association and the Complementary and Natural Healthcare Council) and a list of their members' websites. We sincerely hope that these trade bodies will now inform their members of this decision and the requirement to abide by the ASA's guidance and adjudications. We also expect them to take whatever steps are necessary to ensure that their members abide by that guidance.

The ASA publish clear guidance on many different therapies as well as general advice on what is, and what is not, acceptable. If any advertiser is in any doubt, the ASA's Copy Advice service can give specific and individual advice, which is free of charge.

Last week, in response to "the marked increase in the number of complaints received by the Advertising Standards Authority (ASA) relating to websites advertising alternative health and particularly homeopathy services and products", the ASA Copy Advice team published some concise and helpful guidance materials for website owners.

Hopefully these will be read and followed by all practitioners who are marketing their services directly to the public. It would certainly make our job easier but in the meantime, they also serve as a useful resource for consumers who might be considering challenging the questionable claims that continue to appear on thousands of UK websites.

The guidance can be accessed from here.

﻿Finally, we are pleased to help publicise a new campaign by the Sense About Science charity. Launched a couple of weeks ago, Ask for Evidence encourages people to demand evidence for scientific and medical claims. Advertisers, companies, Government bodies and other organisations get away with making misleading claims that, despite the good efforts of regulators, crop up again and again. To address this, Sense About Science are striving to equip people to ask questions about evidence for themselves.

Visit the website for examples of evidence hunting about claims and for tips about how to respond to claims. The charity has over 5,000 scientists and hundreds of organisations on hand to help.

To find out more about the campaign, click on the button:

1 "Is reflexology the new cure for infertility? | Mail Online", http://www.dailymail.co.uk/health/article-20980/Is-reflexology-new-cure-infertility.html